What a morning.  December 22 on St Simons Island was COLD and WINDY and even a little WET.  Three factors not that great when you are trying to get several folks out of bed just days before Christmas so they can take the DRP.  It was 44 degrees (O lied and said it was 48).  Wind blowing 10 steady and gusting to double that.  When I got up early to go over the plan, my hopes were dashed and I really thought if we could get to double digits – it just might be a win.

I decided to start my fun early by waking up my 2.0 Tebow with Catnips way oversized speaker blaring Thunderstruck into his room.  It worked.  My sprits began to soar.  We headed to the prettiest AO in all of the F3 Nation and began the setup.  Speaker in place – check; Cones in place – check; Flags in place – ok 2 out of 3 aint bad (we used to have them – really, look below). 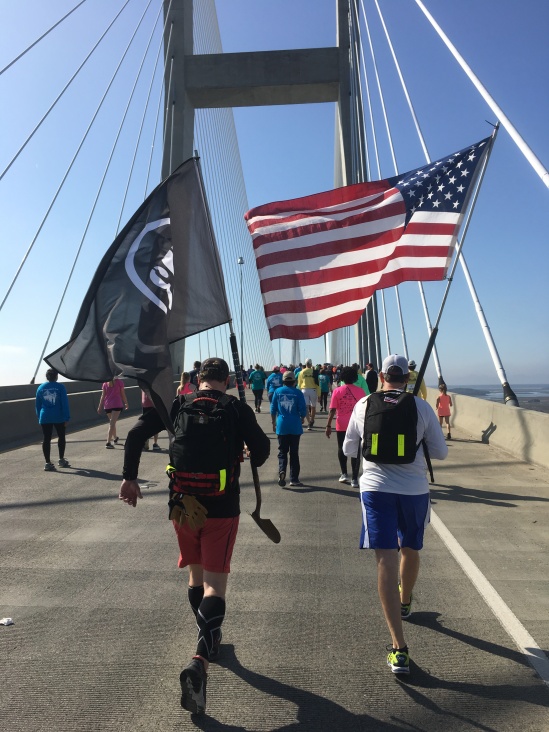 And just like that it was 6:50 and the headlights started to appear.  It was glorious – like the landing sequence in Diehard 2 just after Bruce Willis blew up the bad guys plane – LIGHTS EVERYWHERE.  And look – a Christmas Miracle – our SSI F3 flag had returned from Trembling Earth/Waycross.  My spirits inched higher still.

We moseyed from the parking lot to the big flagpole and circled up.  Disclaimer and then it was time to do some work.

But first, the music.  Our first selection, as always when I Q, was Uptown Girl.  This was followed by Most Wonderful Time of the Year. We did the following warm up:

Once Lap around the trees

And just as the music changed to Santa Clause is Coming to Town, another Christmas Miracle – Santa Clause appeared out of the gloom in full uniform, sans pants which had bee replaced by Ranger Panties and a knee Brace.  Well this close to Christmas, you don’t ask questions and so I turned the Q over to the Big Man himself. 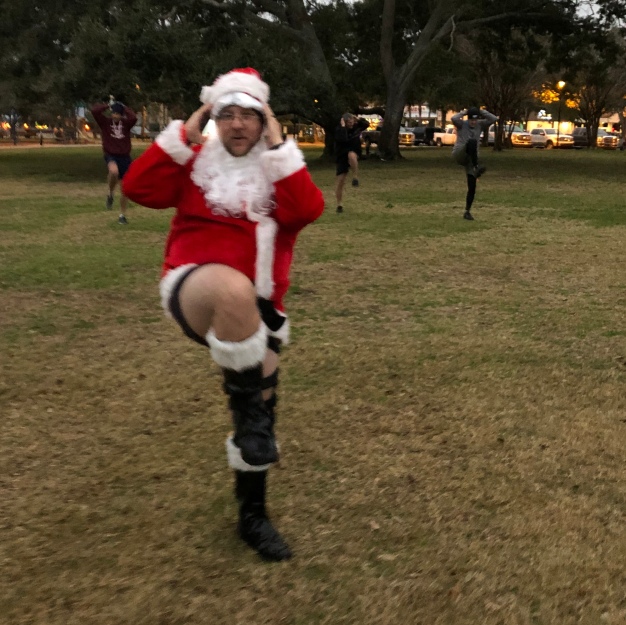 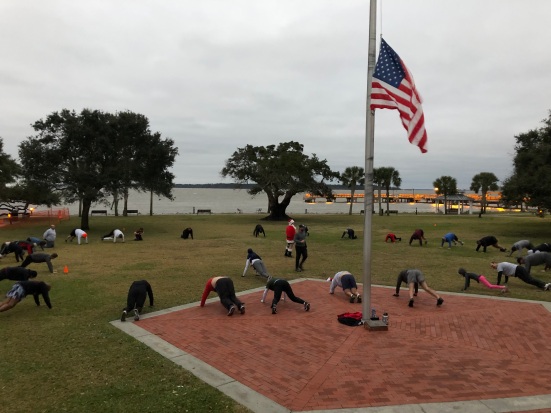 The Song Changed as did the exercise.  Welcome to the Jungle and Running with the Devil  played while we did our first Dora of the day.  50 merkins, 100 squats, 150 LBCs – bear crawl to the far pylon and then lunge walk back to the start.  Switch partners and keep on going. 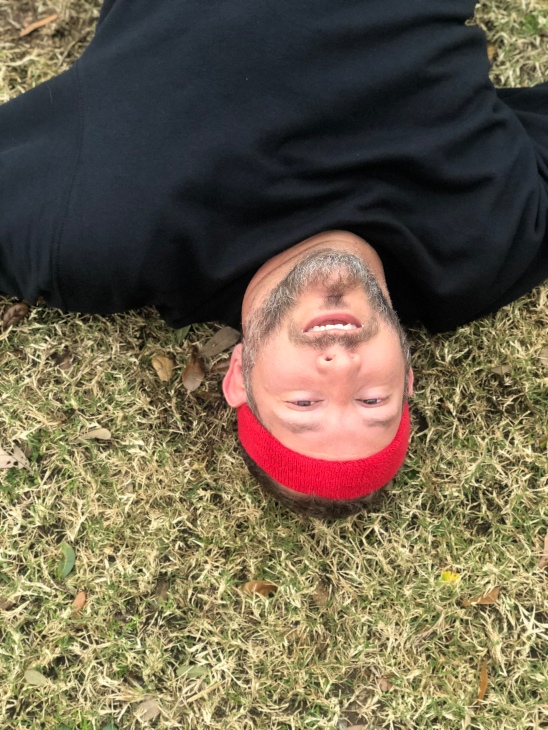 Next Up was Ozzie and Crazy Train for our Monkey in the Middle.  For this we gathered in Groups of 3 (no same partners).  On one side the exercise was Mountain climbers.  On the other side the exercise was Hillbillies.  And if you were the monkey in the middle of the pylons you were crab walking one direction and lunging walking the other direction.  It was lots of fun.  This must be a Bad Santa.

But no – this is a goode Santa, because next we did Morracan Night Club, IC – 12 and Wonder Bra, IC – 25, all to the wonderful sounds of Chuck Berry and Johhny B Goode. 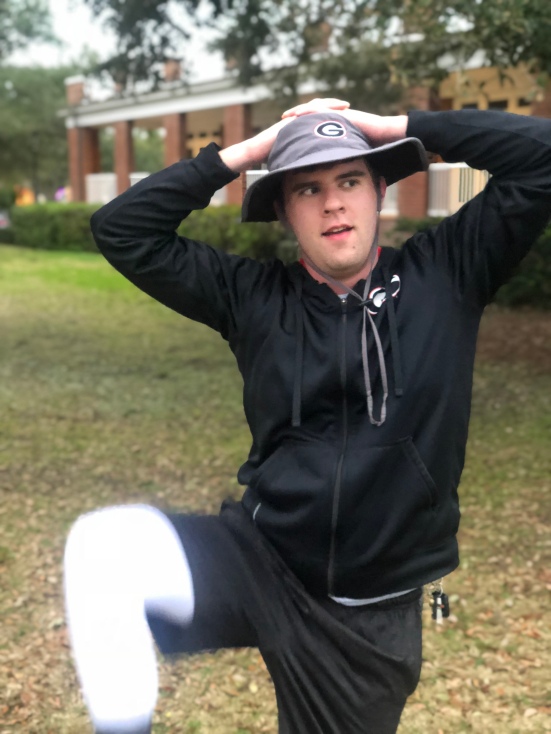 But the winds changed and it was back to our second Dora.  Find another new partner and this time it was 50-Scorpions, 100 Lunges (in place) and 150 American Hammers.  Staying Alive was a good goal at this point and thanks to the BeeGee’s it was also on the speaker – that and Immigrant Song by Zep. 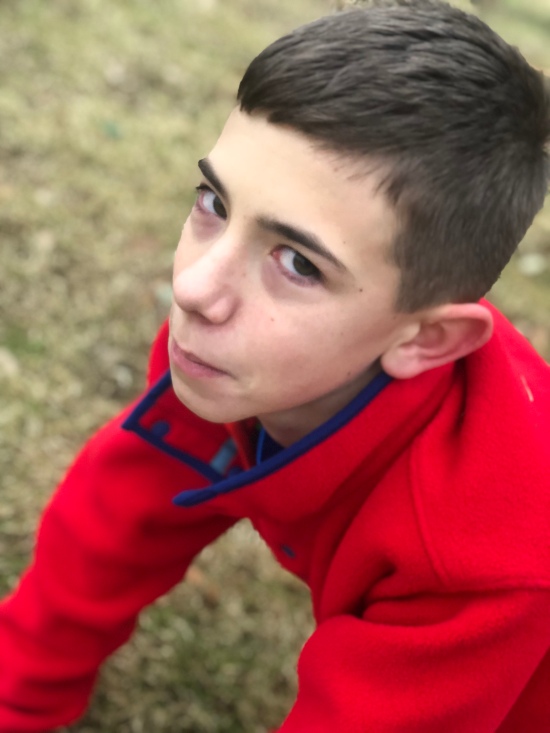 Santa had had enough and handed the Q back over to Uptown Girl (another miracle) – but Uptown had some ego built up by Santa stealing his Q and decided to Stick it to the PAX.  The best was to do that was with the help of ACDC and Thunderstruck.  Que the song.  The PAX runs in place and when Thunder is heard, it’s tie for a deep squat.  That is until halfway through when we dropped to a plank and did a Merkin at every utterance of Thunder.  I think I bit off more than I could chew – ouch.

It was time for our cooldown and for this, I called upon Bundy.  Why?  #1 he’s leaving – moving to Dalton.  #2 – because he’s good at the cool down.  So as In the Air Tonight quietly filled the cold air still hovering, Bundy led us through several much needed yoga stretches.  The twisting torso one with the shoulder on the ground was a b*#ch. 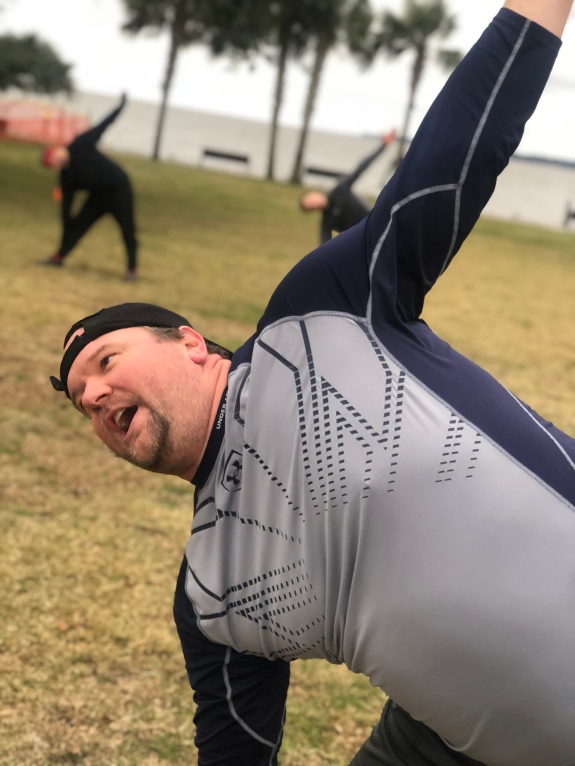 Next we did the count-o-rama (33 + 2), name-o-rama, naming of FNGs (Toothpick, Yugo & Bewitched) and announcements.  We balled up, prayed out and headed to Palm Coast for some coffeeteria.

Thanks to Trembling Earth/Waycross for showing up and bringing our flag home.

It was a great morning – thanks to all of those who were able to make it and also to those who couldn’t but said they would pray for the group (you know who you are).

Thanks to TwinkleToes for coming off the DL and filling our Santa role today.

Thanks to Bundy for being Bundy – and good luck on your move.

Finally, mad props to DodgeBall who showed up and worked out with the best coupon ever – his 2 year old son! – He was the +2 above as the coupon had to go to the bathroom and thus a departure beofre the count-o-rama.

Merry Christmas to Everyone – and to all a good night!